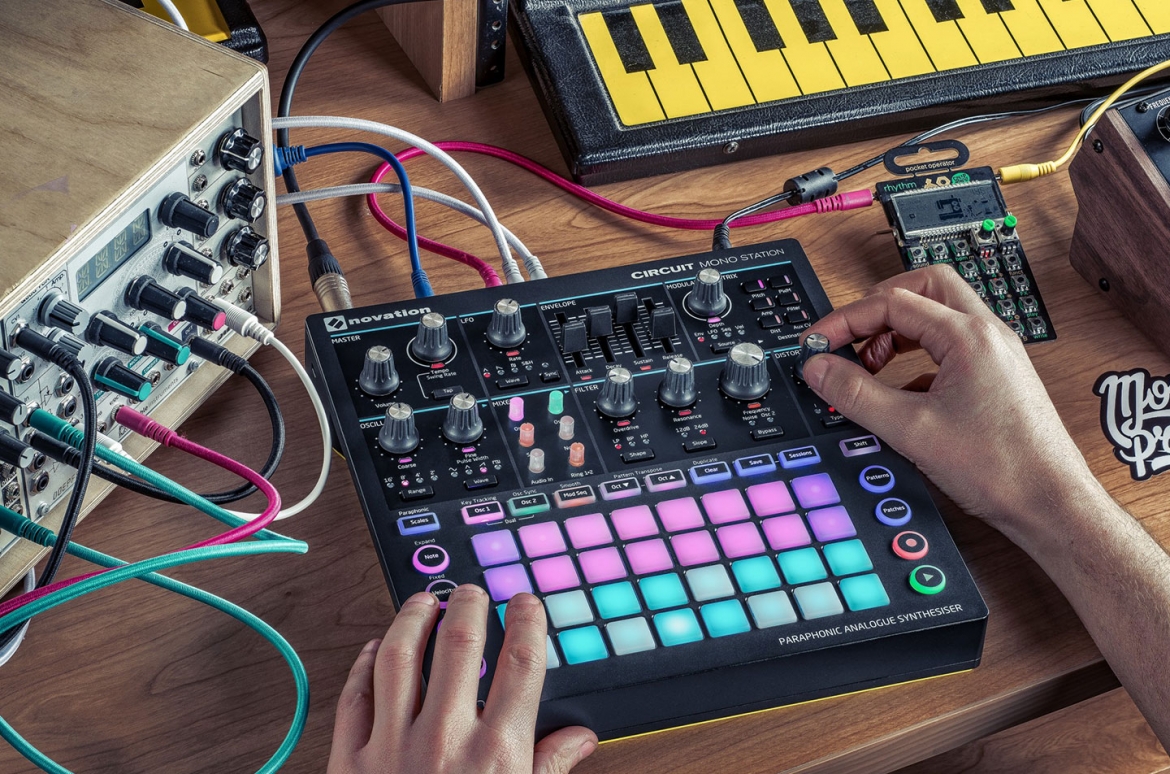 Its lower section is essentially the original Circuit shorn of it's macro knobs, while the upper half pulls together the main controls from the Bass Station II. And while the colours were equally garish on the original Circuit, there was generally always one that dominated depending on what mode you happened to be in. With the Circuit Mono Station, the increase in controllable parameters means its palette is closer to a Matisse than a Rothko.

There is, however, some logic to the way the colours function. All knobs, buttons and pads related to Oscillator 1 are a pinky-purple. Oscillator 2 is a green-hued blue, while global controls light up in orange. As on the Circuit, every control that can be modulated (by the Modulation Matrix) or automated (via real-time or parameter-lock style step-recording) shows this in real-time through the pulsing intensity of its colour. Initially, this doesn't help too much with the overall visual clutter. But after some getting used to, it's clear the colours provide invaluable feedback. They tell you how the Circuit Mono Station is doing what it's doing, which is important because it's very easy to get carried away with this thing.

First though, it's worth explaining how the Circuit Mono Station works. It's billed as a paraphonic synthesiser, which is a term we don't come across too often. Despite being ostensibly a mono synth, it actually has two oscillators, whose pitches can be programmed independently of one another. However, both oscillators share the same filter and amp. In normal use, Oscillator 1 controls the level of the amp, and Oscillator 2 can only be heard while Oscillator 1 is playing and thus keeping the amp envelope open. Interestingly enough, by activating Paraphonic Mode 2, Oscillator 2 can also control the amp and can be heard regardless of what Oscillator 1 is doing. It's an approach to synthesis that I still struggle to fully get my head around, but it's a boon for coming up with wild and unpredictable sequences.

If you've ever heard Novation's Bass Station II, then you'll know exactly what the Mono Station sounds like. While a few of the Bass Station II's features have been lost along the way, (the second LFO being the main omission), there are a number of interesting additions that more than make up for it. The main score is the Modulation Matrix. This is a simplified but more hands-on version of the matrix found on Novation's recently reviewed Peak polysynth. Its four sources, namely Envelope, LFO, Mod Sequence and Velocity, can be set to positive or negative values—or both, as naturally recorded automation can also affect this modulation. These can be routed to six destinations: Pitch, Pulse Width, Amp, Filter, Distortion and Aux CV out. The matrix, in combination with the incredibly intuitive Circuit sequencer, allows for simple sequences to very swiftly take on a mind of their own. 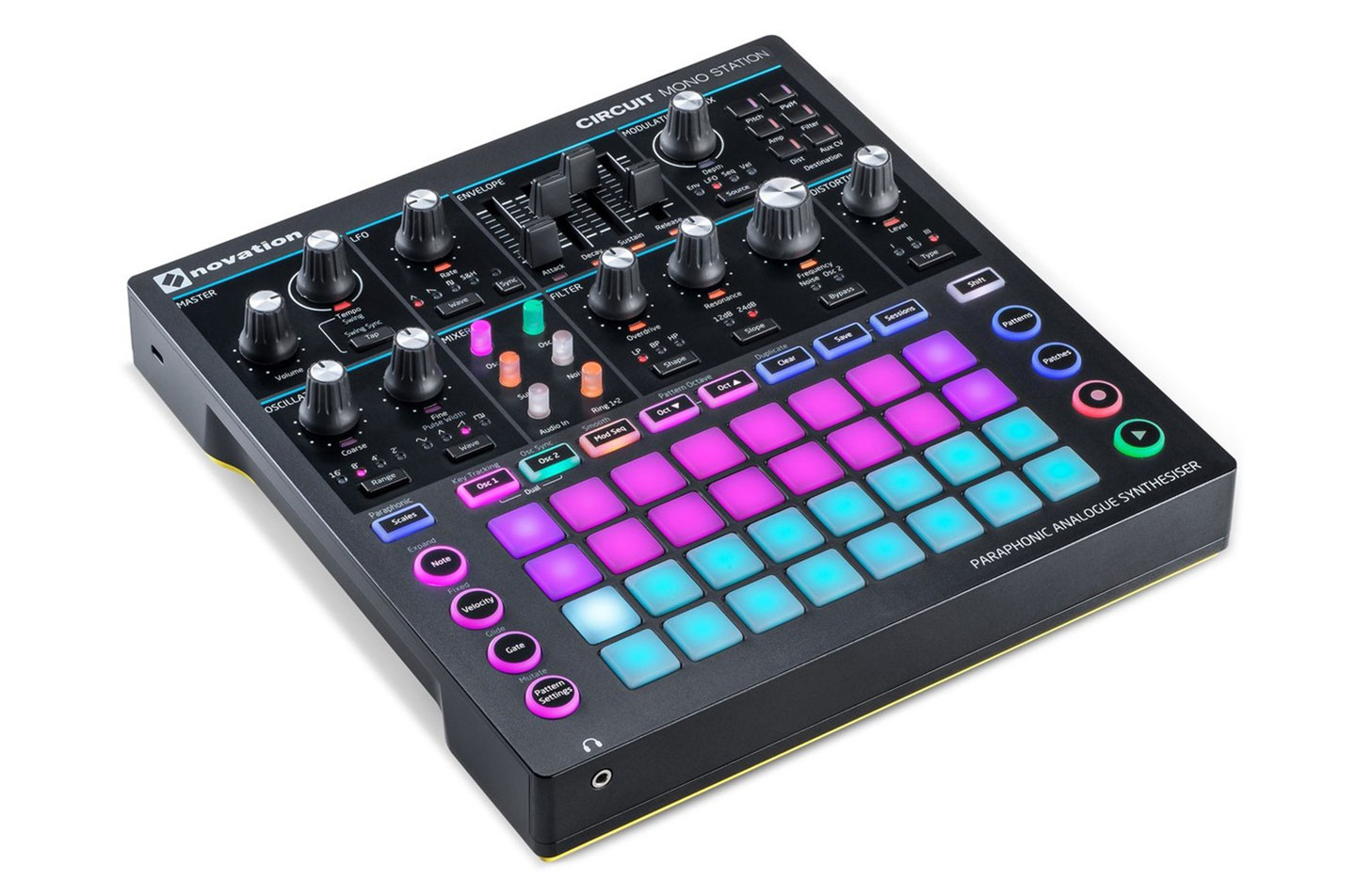 The two recordings below are quick and dirty examples of what it can do. In the first, a simple 16-step sequence is being played by a basic square wave patch, the pulse width of which can be adjusted by turning the oscillator's Fine control while holding down the Shift button. It should be noted that you'll find yourself pressing the Shift button a lot to access a number of important features and modes. It might seem like a bit of a pain at first but it quickly becomes second nature. Characteristic of the fizzy, harmonically rich sound that the Bass Station is known for, this sequence is nonetheless a little tame in its current state.

The following recording explores what can be achieved through some very basic modulation and automation. I've used the same sequence but messed around with a few of the controls to achieve something much more aggressive and dynamic. The LFO is set to its synced Sample & Hold setting and is controlling both the Pulse Width of Oscillator 1 and the frequency of the Filter via the Modulation Matrix. The Envelope is controlling the depth of Distortion as well as the level of the Amp (and thus the overall output of the unit), while the Resonance was recorded in real-time over the four bars.

It's not all anger and distortion though. While you'll struggle to get anything resembling a pad out of the Circuit Mono Station, smooth, powerful basslines and twinkling leads are well within your grasp. If you're unable to find the sound you're after, it's possible to utilise the combined power of the matrix and sequencer through the Circuit Mono Station's numerous outputs. As well as MIDI Out and Thru, it comes with a number of CV-friendly options for powering external gear and modular systems. Besides CV, Gate, and Clock outputs, the Aux CV output routes directly from the Modulation Matrix, meaning that any of the four sources can be combined and sent out as modulation.

One of these sources is the Modulation Sequencer. It's a dedicated track for carrying parameter control data and you won't find it on the original Circuit. Values are assigned on a per-step basis in the same way that Velocity and Gate information is assigned to the oscillator sequencer tracks. It also features something Novation call a Smooth function. This works in much the same way as portamento or glide, creating a smooth arc between values as opposed to jagged, per-step jumps. This sequence can then be fed via the Modulation Matrix to any of the six destinations. 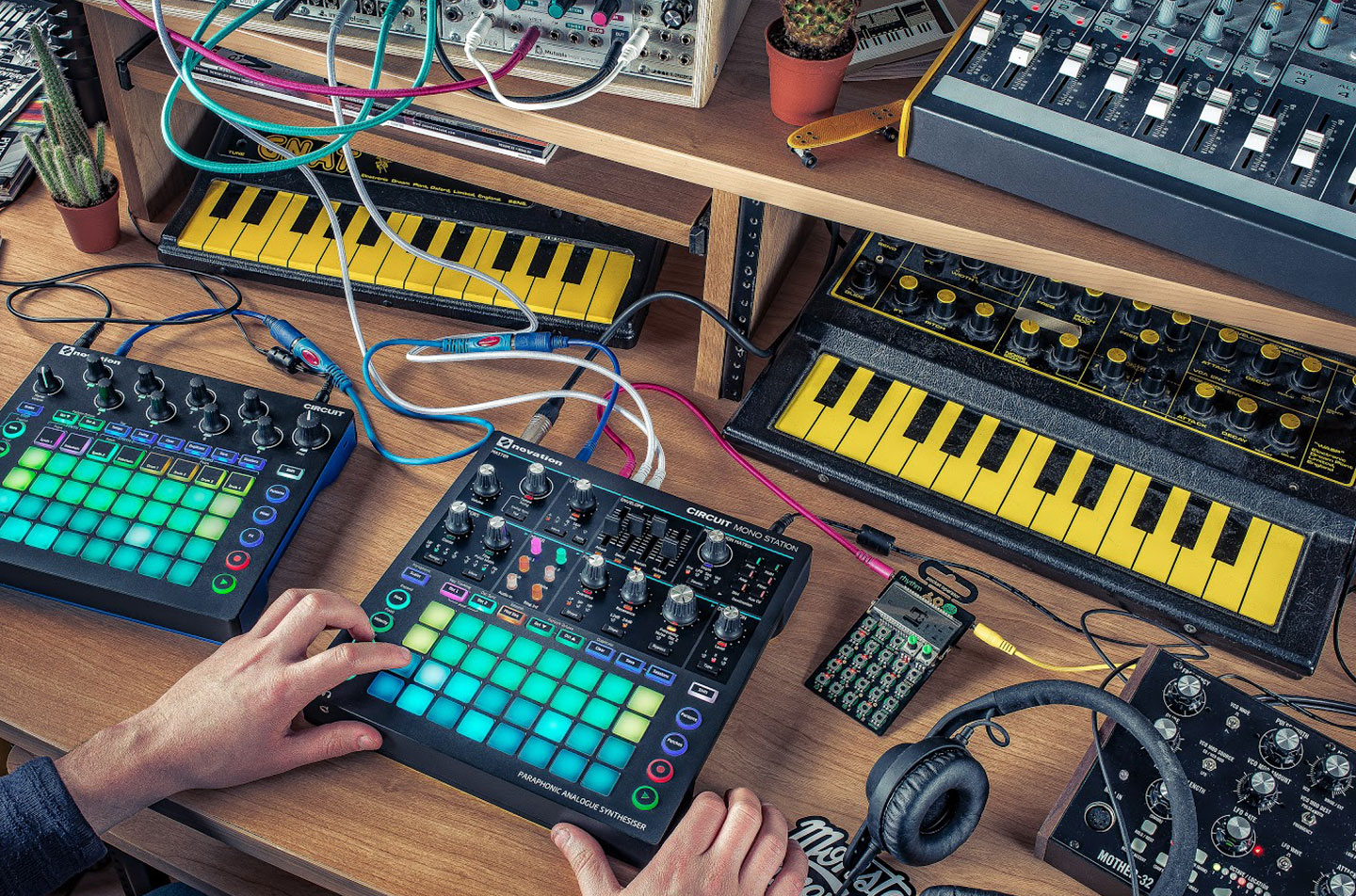 It really comes into its own when used as a source for the Aux CV output. This means we have a second CV out at our disposal for controlling anything else we like. In the below example, the CV and Gate outputs from the Circuit Mono Station are patched to the 1V/Oct and Gate inputs of a Make Noise 0-Coast, while the Aux CV is patched the Decay input of the Contour circuit. The Modulation Sequence has been programmed to send simple on/off data in 16th steps and plays notes randomly with the Smooth function enabled. This results in a pleasingly controlled randomness, perfect for recording a long take to edit into something manageable later on.

Another very useful addition in terms of sequencing capabilities comes in the form of a dedicated Pattern Settings page. Replacing (and essentially incorporating) the Circuit's Nudge button and functions, it lets you assign sequencer start and end points, decide in which direction it travels (forwards, backwards, ping-pong and random) and its sync rate. Each sequencer can have its own unique pattern settings defined by the page, meaning that, between the three of them, it's possible to compose long, evolving sequences with strange, unexpected combinations.

The lack of effects was the main issue I had with the Mono Station. Delay and reverb can really help a mono synth come alive, and here they are sorely missed. The FX button on the original Circuit has been replaced with a dedicated Patches button, despite the fact that you can't preview patches unless a sequence is running. This is something that was rectified in the latest Circuit firmware update, so there's a chance we'll see a similar fix for the Circuit Mono Station.

Despite these small niggles, it's clear that the Circuit Mono Station is more than the sum of its parts. Yes, it's essentially a pared-down Bass Station II bolted onto a pared-down Circuit. But the new features it brings to the table in the form of the Modulation Matrix, advanced sequencing options and comprehensive external control capabilities more than justify its existence. Its sound, while thick and weighty, can arguably get a little grating at times, so if it's not something you're into, it's worth taking look at the original Circuit. It offers the same powerful sequencer (hopefully those pattern settings options from the Circuit Mono Station will make their way over in a future update), an expansive synth editor and sample playback. But while you can get a Bass Station II or Circuit for less, you'll be missing out either way on what makes the Circuit Mono Station unique.